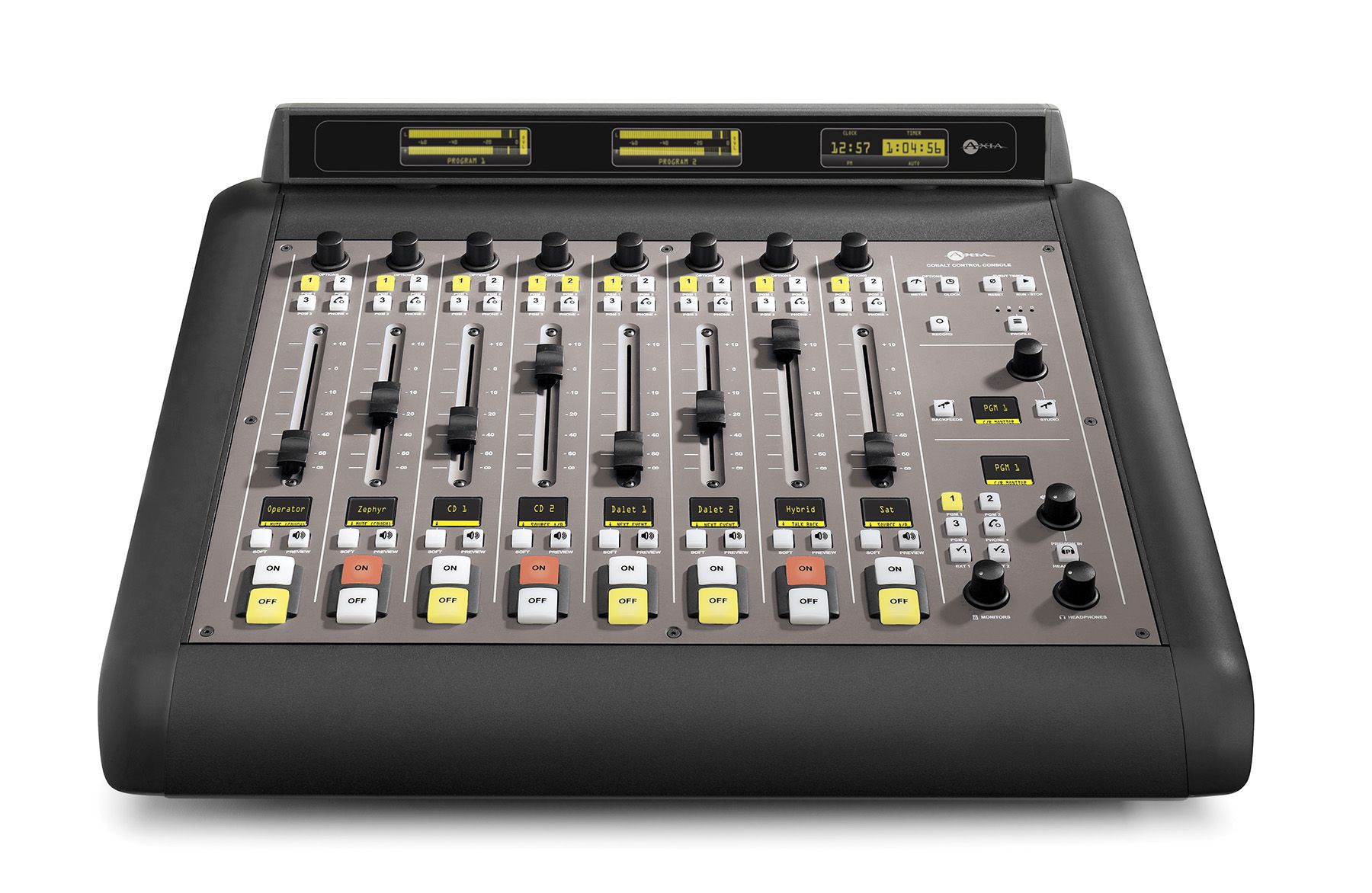 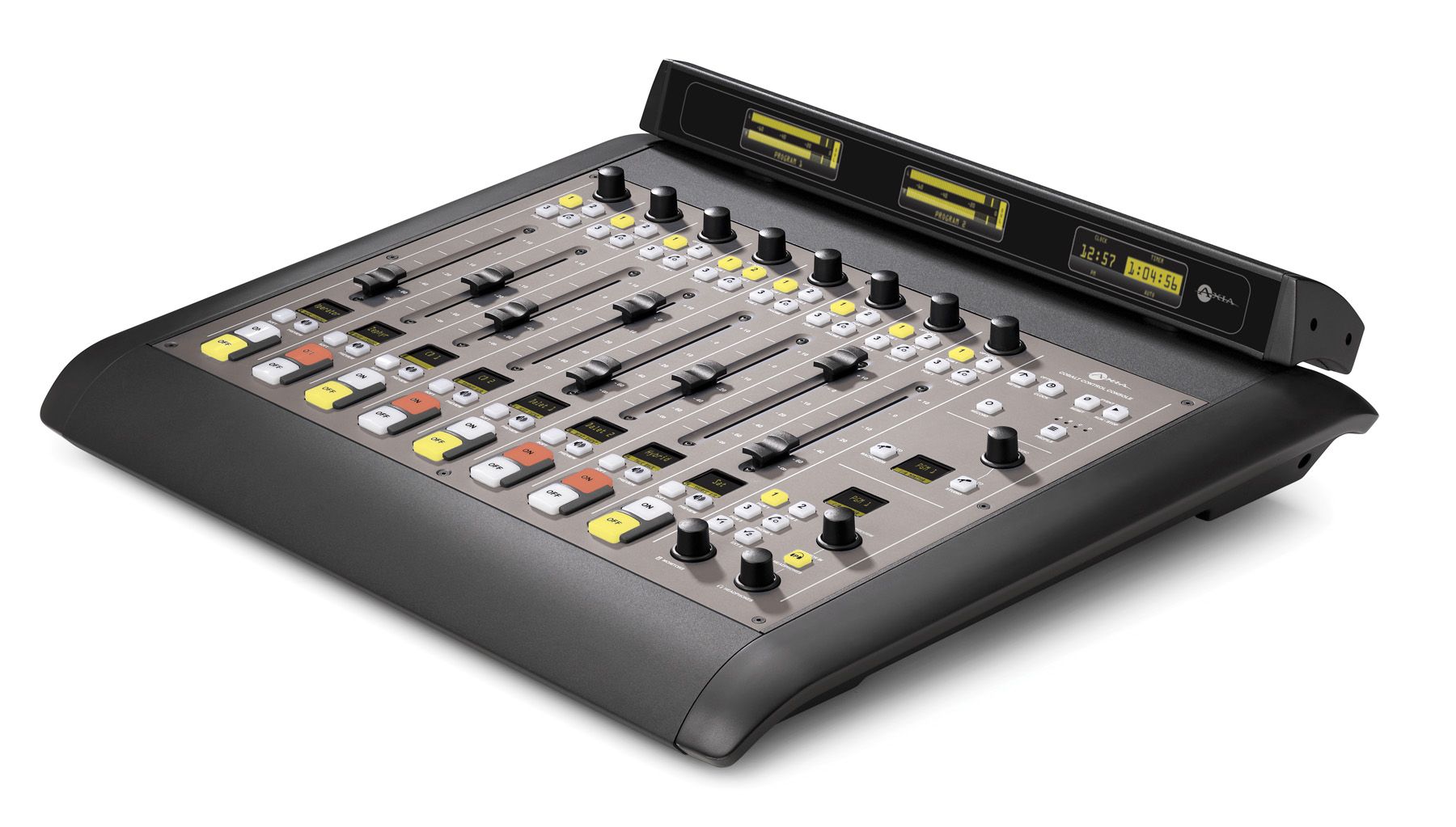 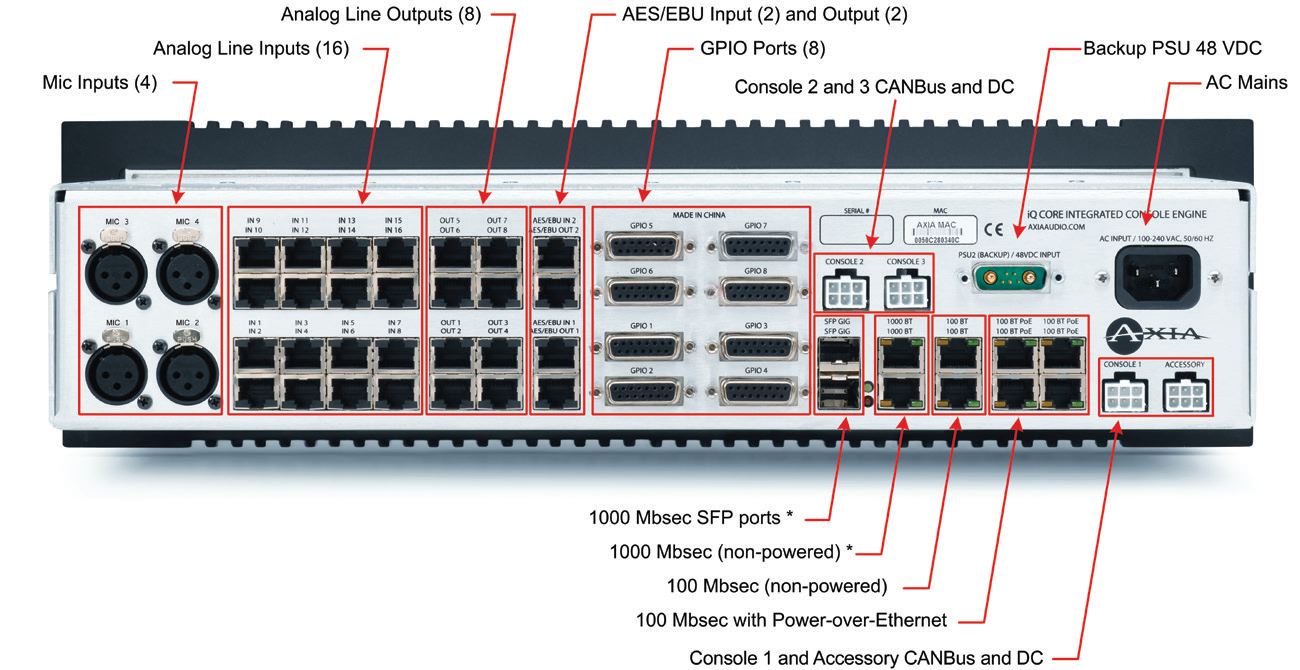 The Axia® iQ radio console system can be used to build custom consoles of sizes from 8 to 24 faders. A basic system consists of one iQ 8-Fader Main Frame and one QOR.32 integrated console engine, a DSP- based mixing engine which also incorporates analog and digital audio I/O, GPIO and a custom, zero- configuration Ethernet switch. Faders and control capabilities can be expanded by adding one or more iQ Expansion Frames (up to a maximum of 3 frames per console installation). iQ console frames may be placed on top of desk surface, or mounted drop-in style. Multiple frames may be physically joined if desired.

iQ operates as a standalone console, but can also connect to Axia networks. The iQ mixing surface plugs into the QOR.32 engine using a single cable. Setup couldn’t be simpler: connect the iQ control surface to the QOR.32, add audio inputs using CAT-5, perform some fast Web-based configuration, and your iQ system is ready to broadcast. It really is that simple!

Control at the Click of a Mouse. Easy Installation. Fast Configuration. Intuitive Operation.

Control at the Click of a Mouse. Easy Installation. Fast Configuration. Intuitive Operation.

For today’s broadcast engineer, there aren’t enough hours in the day. You’re looking for a console that makes the most of your resources. One that installs quickly, with a minimum of fuss. One that works smart, with features that help talent to do smoother, more error-free shows. One that’s perfectly happy in a standalone studio — but that also connects quickly and easily to a larger studio network.

Thanks to all those built-in goodies, iQ is the perfect self-contained, standalone console for an individual studio. But should you wish to expand and network with other studios, iQ can grow with you. Simple Networking lets you daisy-chain up to four QOR.32 engines without the need for an external Ethernet switch. You can add iQ expansion frames to create consoles as large as 24 faders. Other optional frames add control for Telos telephone systems and GPIO routing functions to the console.

More smart stuff: iQ remembers. Four Show Profile memory positions let you set, save and recall snapshots of console settings for later use. High-resolution Organic LED meters (bright, high-resolution displays that are bright and legible, even under direct lighting) offer switchable VU or PPM metering styles, and the ability to meter two, three, or all four buses at once.

There are also OLED displays on every fader that provide source assignments, pan & balance settings, fader options and more — which means no additional computer monitors or mice to clutter up your studio. The display can also work with the Soft Keys just below to trigger GPIO events, step automation events, and adjust source input options.

iQ saves your studio furniture, too. Its desktop design lets you place it atop any solid surface — no templates to decipher or countertops to cut (unless you really want to). Since iQ only requires a single cable to connect control surface to mixing engine, even cable access holes can be small and unobtrusive. And iQ lets you choose between freestanding or contiguous console designs: you can easily join iQ expansion frames into one unit, or leave them separate to deploy a split-console design.

Like all Axia consoles, iQ is over-engineered for long life. It’s built with sturdy, premium materials, to withstand even the beatings a weekend overnight jock can give. It’s got sturdy, machined aluminum frame construction, LED button lighting, long-life conductive-plastic faders, and anodized – not painted! – surfaces with laser-etched markings that can’t ever rub off. But the most clever thing about iQ might just be its price. A 16-fader iQ costs about half what you’d expect to pay for a console with all these features. Now that’s pretty smart, don’t you think?

Like all Axia systems, iQ is customizable and scalable. The QOR.32 integrated console engine contains the console’s mix engine, CPU, power supply and 32 audio I/O connections, and supports console sizes from 8 to 24 faders. Start with an eight-fader iQ Main Frame, then add expansion frames with more faders and capabilities to tailor iQ to your studio’s needs. Gigabit Ethernet lets you connect to a larger Axia network; Simple Networking lets you daisy-chain up to four QOR.32 without the need for an external Ethernet switch. 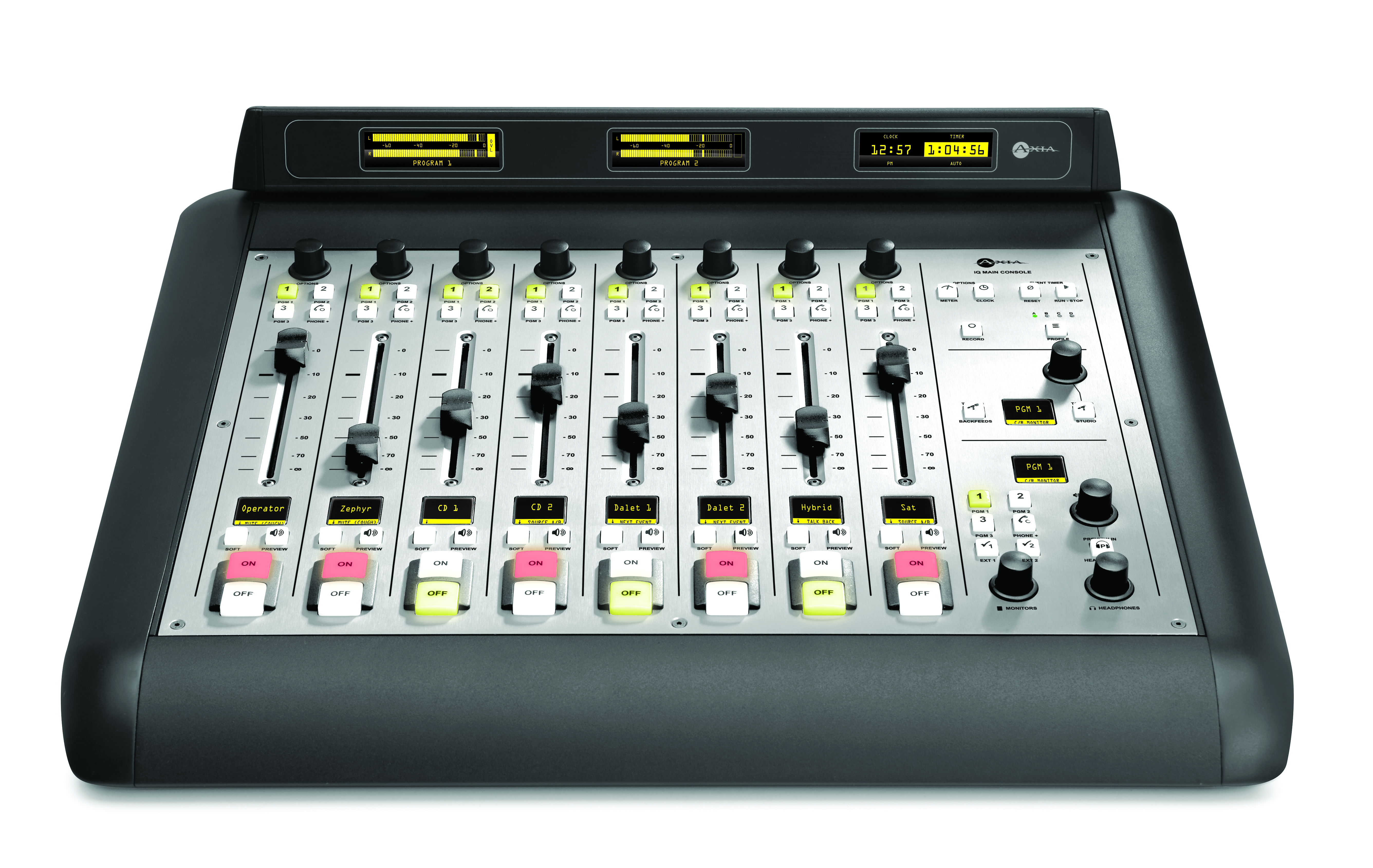 The heart of your iQ console; can be installed as a standalone console or connected to an Axia studio network. Has three dedicated stereo Program buses, plus a stereo utility bus that can be used for phone calls, off-air recording, or as a fourth Program bus, eight faders, automatic per-fader mix-minus, high- rez OLED program meters and channel displays, Studio and Control Room monitor controls and an integrated Talkback system. For bigger consoles, add one or two iQ expansion frames to build boards of up to 24 faders. Flexible mounting system allows desktop, drop-in and even rack-mounted operation. 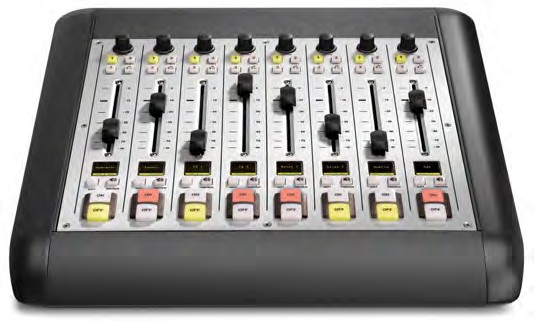 The iQ 8-Fader frame doubles the size of your iQ instantly. It’s simple to expand the capacity of iQ consoles, even after they’ve been in service, so you can easily grow your iQ system; expansion frames plug right into the QOR.32 integrated console engine. Like all iQ frames, the 8-Fader expansion comes equipped with Axia’s rugged, anodized machined-aluminum surface, conductive-plastic faders, aircraft- quality switches and LED button lighting. Can be physically joined to Main Frame or left separate. 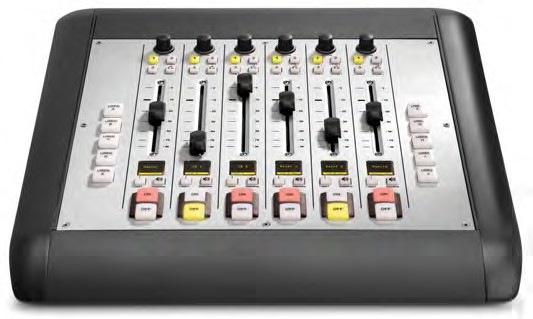 Put machine control and GPIO-triggered routing commands at your operators’ fingertips with this iQ expansion frame. In addition to the six additional faders, 10 User Keys can be software-mapped to control audio delivery systems, send contact closures or route GPIO commands to studio devices. 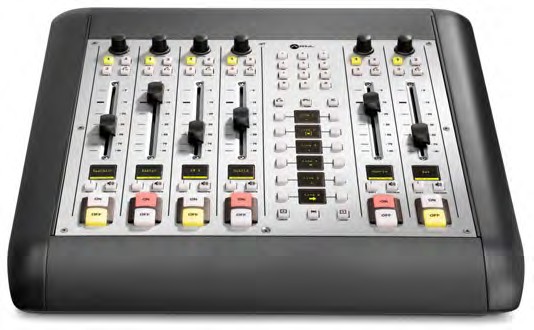 The iQ6 broadcast phone system was custom-designed by the phone experts at Telos specifically for iQ consoles. It works with the hybrid controls built into your iQ’s Telco expansion frame (and with Telos VSet6 phone controllers). Connect it to the QOR.32 console engine with a CAT-6 cable, plug in your phone lines, and start taking calls. 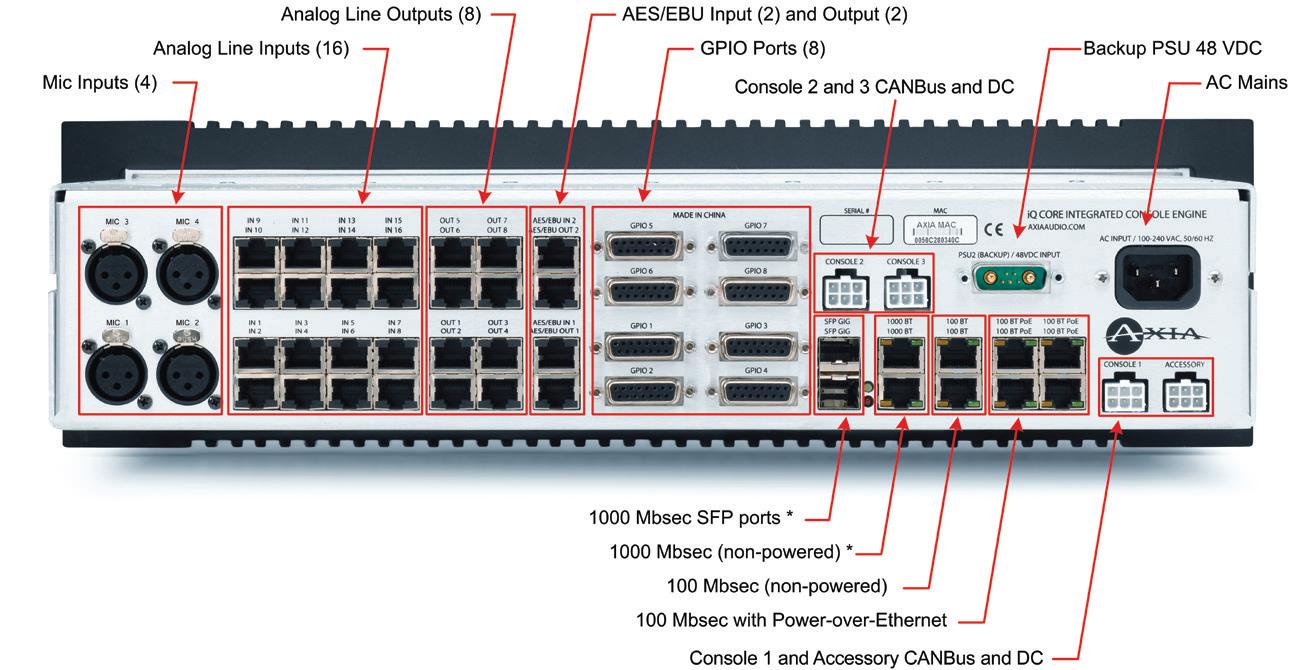